Coins are used in the Angry Birds series to purchase various items.

Starting with Angry Birds Friends, players can accrue coins (or Bird Coins) in most games of the series. Bird Coins appear as small gold coins with Red's face on them. Some coins have different appearances in other games.

When you start the game for the first time after the release of the Bird Coins, you get a text box telling you about them, and you can also get

× 440, but only once. You can earn more for free by earning stars in Weekly Tournaments, and completing them. When you complete a Tournament Level, you will get +

from daily rewards. You will get +

× 50 in the fifth day in a row. However, streak will be restart every five days if you login every day.

The currency on the game is the credits, which works the same way as coins. To obtain them, the player must complete Tournament Levels or buy them with real-life money. They can be used to buy Power-Ups and Crystals, which cost the following:

In the game, the credits come back, where they work differently. Instead of being used to buy power-ups, it is used to unlock episodes and buy characters, which the amount of each collected and their price varies, according to the character's strength. The player can buy infinite characters with a lot of coins.

In Angry Birds Go!, Bird Coins appear in every track and can be collected to increase the amount of awarded coins when finishing a race.

In v2.0, they are mainly used to purchase upgrades for the player's karts with upgrade parts, and it's also used for purchase 3 upgrade parts at the shop (100 coins for regular parts, 1,000 coins for Rare parts, and 10,000 for Epic parts). There's a big coins appear in every track as well, for 50 coins.

Coins are used to buy equipment, potions, etc. They are dropped by defeated enemies and can be obtained by purchasing, completing levels, etc. Those are the currency:

In Angry Birds Stella, the pigs can drop coins on the levels, you can get coins by earning the stars and roulette wheel after you pass the Bonus Levels.

They're mainly used to spend on the characters, and the Hammer power-up. You can also spend coins on investigate area to find the pigs on the map.

There are a lot of currency in the game that is used on various things. See more about them here

Coins appear in the game as currency used to buy Boosters, Lives, etc. They are obtained in hard ways such as quests, event rewards and can be purchased by only real life money. They are also used on buying gems. The player starts with some coins in the game and he needs to spend it wisely to not run out of it. They are commonly used when the player runs out of moves, which the player can purchase more or watch a video.

They were added in the Treasure Hunt update, they are used the same way as in other games and appear as

collectable items in the Treasure Hunt episode, where they can also be collected to unlock the bonus level.

They can also obtained by watching ads, getting stars, buying them with real money or collecting them, they can be used to buy Power-Ups, these are the prices:

There are also daily deals that feature Coin purchases, so it's good to collect a lot of them to get a lot of Power-Ups.

In Bad Piggies, the player earn coins by completing a level, get the Star Boxes (only in Sandbox), and feed the King Pig. The players can get coins by earning stars. Player get 1 coin for 1 star, 2 for 2 stars, and 3 for 3 stars. The name of the coins is Snout Coins.

Coins were added on the Invasion of the Egg Snatchers update along with Bird Wear and Telebird. They are obtained after beating a level, watching ads or by purchasing it. They can be used to speed a Quest's time, buy episodes before Ham Dunk, Power-Ups or level-up Telebird or Shockwave Bomb, Star or Feather levels and could buy exclusive Bird Wear, but they were later made free.

Bird Coins used to only appear in Angry Birds for Kakao, Angry Birds & the Chinese Version. They used to purchase Power-Ups and Mighty Eagle. You can earn them by getting stars just for 10 coins. Coins were eventually added to every other region of Angry Birds. They are only used to buy power-ups. They can be purchased with Gems.

Coins appear in Angry Birds Action! with purposes, which is used to fill Chests. There's also the gems that act similarly, but are used to revive the bird when he runs out of birds and moves and to buy Power-Ups.

It appears as the main currency of the game, this is how to use it: It is used to pay for basic stuff. Gold can be obtained by:

Coins in the game appear in the game to make various things and this is a complete list of how to play with them: They can be obtained from:

The coins in the game are used for various things, such as buying buildings, decorations, planting, etc. They are awarded after completing missions, leveling up and other.

Cons reappear in the game as two types:

In Angry Birds Evolution Money is obtained by pretty much any action you take, including successful scouting!. The most reliable source of income is completing daily challenges, logging into the app every day, and of course, winning battles against the deplorable pigs!

Used for pretty much everything. The most important purpose is, of course, leveling up your birds, although almost any other actions will deplete them.

In the Angry Birds animated films, Bird society and life appears to run on a currency system of sorts. In the days before the Great Egg War, Birds used primitive forms of currency that could be bartered for services. For instance, the Hug Trader in Bird Village charged one red berry for any additional hugs requested at his stand after his first complementary one, when Terence started to hug the customers.[1]

Throughout the war and beyond, the Birds adopted a more modern currency system that used banknotes that each had a picture of Mighty Eagle on its front side. During the Battle of Overseas Pranks, the last battle of the war, Hal was known to own a decent amount of money that he kept in a wallet. After being spurned by her lover Mighty Eagle and choosing to exile herself on Eagle Island, Zeta somehow raised a large amount of money to build her resort, and later a powerful super weapon that she intended to use to expand it through destructive conquest after being discontent with the resort's problems. She also penned a book titled Crazy Rich Avians, which perhaps explains how she got so rich.[2] 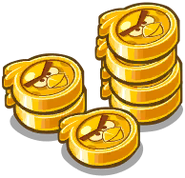 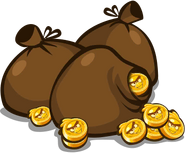