34
Cold Cuts is the second episode in Angry Birds Space and consists of 34 levels. This episode introduces the Ice Bird and Terence. It also introduces a very large pig that is larger than all of the Bad Piggies, though he only appears as an actual enemy in the bonus levels.

Cold Cuts takes place mainly on ice planets, along with a few planets from Pig Bang and the background is a lighter blue than Pig Bang, has ice crystals and swirly clouds. Crystal mushrooms can be found in Cold Cuts, rewarding the player 3000 points. Cold Cuts could be the episode that takes place in the Ice Bird's homeworld.

PUT ON ICE
It's enough to chill your blood. One minute Ice Bird was attacking Space King Pig's claw ship and the next he'd been blasted by the freeze cannon. The Space Flock watched in horror as Ice Bird floated away in a frozen bubble. Space King Pig chortled, thinking he was so cool. Little did he know he was about to get hot under the collar . . .

The Birds arrive in an ice galaxy, just in time to witness the Ice Bird get captured in a bubble by the Space King.

The Birds defeat the Space King and retrieve the Eggsteroid.

): Freeze everything within radius into ice.

): Can make pigs scared and they jump. Causes great destruction.

See more information at Cold Cuts 2-30 (Angry Birds Space) The boss of this episode is again the King Pig, this time in the UFO he used to escape with in Pig Bang. 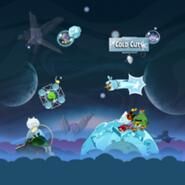