Slow The Chuck Down

Cold Justice is the eighteenth episode of Angry Birds Toons Season 2 and the seventieth overall.

Matilda has a guilty pleasure: pig hockey. She's such a superfan, she even dreams of joining the game herself! There's just one problem – she's not a pig.

The episode begins with a crowd of pigs going to a stadium to watch some ice hockey, and just when all the pigs were in the stadium, Matilda emerges from a nearby bush and starts to enter the stadium. Before she could enter, she notices a poster of a pig that happens to also be on the blue team, the team she's cheering for, and puts on a pig's snout disguise in order to watch the game without getting caught.

She enters the stadium and watches the game, the afro pig (the pig Matilda fell in love with) showing off his skills by simply spinning a hockey stick multiple times, and this excites the audience.

Matilda jumps into the stadium to try to help the afro pig, but finds that he's too hurt to continue, and Matilda starts to cry as the Goliath Pig repeatedly scores for the red team, gaining more points, and seeing this, Matilda becomes angry. Instead of scoring points for the blue team using the hockey puck, she scores points with pigs instead, hitting them into their own goal. This scores the blue team with more points than the red team, resulting in the blue team's victory.

The afro pig, now on a stretcher, gives the trophy to Matilda and seems proud of her for standing up for him, Matilda begins to cry tears of joy. As Matilda and the blue team celebrate, her pig's snout disguise falls off and the cheering stops, but she's able to put on the disguise again and the cheering immediately resumes.

Note: Notice the red goal post behind Matilda and the trophy.

Note: The red goal post is gone.
Add a photo to this gallery 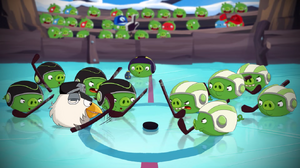 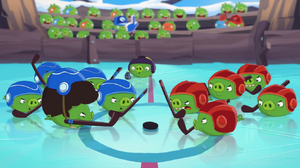 Retrieved from "https://angrybirds.fandom.com/wiki/Cold_Justice?oldid=254132"
Community content is available under CC-BY-SA unless otherwise noted.