Turkey (Meleagris)
Cold Turkey is an Angry Birds Evolution bird that can be obtained at events, such as Thanksgiving, his debuting event.

He is a large fat turkey with yellow feathers, large wings,  a brown large turkey feather tail with dark tips and beige stripes, orange feet and a bunch of feathers near the head.

The head doesn't have feathers and is of a purplish blue complexion, the neck is long, his head has separate eyes that have blue irises and black bushy eyebrows, he also has a large orange beak with teeth and a red snood. He has dark eyebags.

He wears a white tank top with blood.

He has now a dark flame tattoo on his neck and a teardrop one below the eye. He now wears an orange jacket with an orange patch on the left and the number 76-001 on a patch of the right. There's also the words BC.DC on the back of the jacket. The tanktop is not dirty anymore.

Based on the Joker from Batman, he has now white face paint on his face, green hair, his eyebrows are green, his beak is gray and has red paint and his eyebags are black. He wears a green jacket and purple tuxedo with light stripes, a red bow and margaret flower.

He also has a smile tatoo with ''Ha Ha'' on his left wing.

Based on Wario from the Mario franchise, he now has a black and blonde lightning moustache and a chin. He wears a yellow shirt with a purple suspender leading to pants with silver buttons, a yellow hat with a purple T and white gloves.

Dash through enemies, dealing 1138 damage and leaving a trail of stink to deal 130 damage for 2 turns to everything entering or standing inside.

All yellow birds in team get +30% power.

Damage against small pigs increased by 25%. 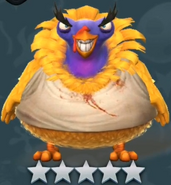 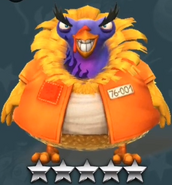 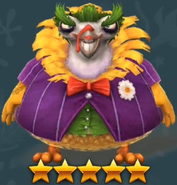 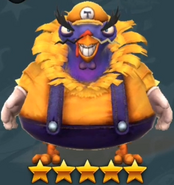