Construction Pigs are a group of several pigs who build things in Pig City. They look like ordinary minion pigs but with a hard hat. Construction Pigs first appeared in the Angry Birds episode The Big Setup, Where they were rebuilding previous structures from previous levels. They were eventually injured by Terence and Hal, who freed the rest of The Flock. Terence was immediately given membership in The Flock after he freed them.

These minion pigs always wear helmets for construction and do their order that was made by their king. For example, in King of the Castle, they were ordered to beat Chef Pig in a sand-castle building competition by building an amazing sand-palace that you could go in to. The palace eventually collapsed when it was run over by a wave. The pigs also probably renovated Pig City.

In The Big Setup, they appeared re-making the broken structures of previous episodes and also appeared on other levels.

And in Piggy Tales: Pigs at Work, they appeared in almost every episode.

Construction pigs appeared in Piggy Tales: Third Act, In Broken Chair, where they were fixing a broken chair in the Piggy Theater. They eventually ended up ruining the chair and the pig sitting in it got trapped.

Construction Pigs also appeared in The Angry Birds Movie, which they were building the party building on Bird Island and helped to build the Pig City, they were harmed by the birds and by an explosion that destroyed the entire Pig City.

In Angry Birds Toons, they appeared on some occasions, like building sandcastles to King Pig.

In Angry Birds 2, they appear in some levels (very commonly in levels after Shangham) and throw their screwdrivers at the birds.

In Angry Birds Evolution, Foreman Pig appears wearing a construction hard hat and is named Mechanic. He builds a turret that shoots tomatoes at the birds.

In Angry Birds Match, they appear as the glue pigs and launch glue at objects, making them glued and trapped. 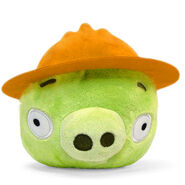 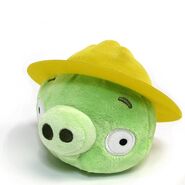 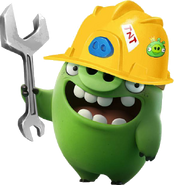 Note: If you look close at his construction helmet, the game version of King Pig is seen. 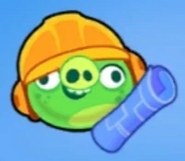