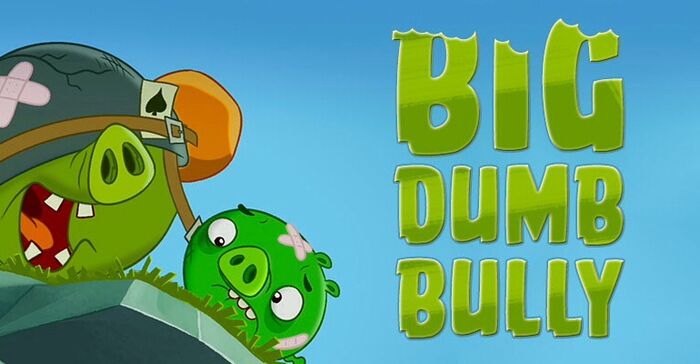 "Excellent. You boys make me proud. In fact, I'm so proud that I'm going to show you something. This is what we're fighting for, boys. This is what makes all the hard work, all of the eating and the napping, all of it worthwhile."
— Corporal Pig, Angry Birds Comics #4

Corporal Pig is a character that appears in the Angry Birds series. He is a pig and the commander of the Minion Pigs.

From "Dopeys on a Rope" onwards, Corporal Pig received a completely different design. His skin is now green-colored, much darker than before, and his eyes cannot be seen due to his helmet covering them. The helmet is now slightly damaged, and has a brown belt across it with a card on it. This design was also used for The Angry Birds Movie, where he was given an anthropomorphic design.

King Pig is Corporal Pig's hero. In his eyes, the monarch is a Greek god who has to be worshipped, and will do absolutely to satisfy him. He is even willing to punish anyone who makes fun of King Pig by catapulting them out of Pig City.[1] Nevertheless, he cannot recognize King Pig if he is not wearing his crown.[3]