Courtney is a pig who appeared in The Angry Birds Movie 2. She was voiced by Awkwafina (Nora Lum), and is the second known named female pig in the Angry Birds franchise after Zam Wessel.

Courtney is Leonard's new piggy assistant. Even though she spends more time texting and listening to music than actually working, Courtney is probably the most competent and skilled assistant Leonard has ever had, which isn’t saying much. And when Leonard barks out orders, like asking her to actually work, Courtney takes it all in stride, but she occasionally dishes out some wicked retorts to combat Leonard's underestimation.

Courtney is a quiet pig that enjoys texting and listening to music on her phone. Even though she is said to be competent and skilled in the description, she really doesn't do anything other than using her smartphone.

Courtney is a pig with brown hair, cyan eyes, freckles, and buck teeth with blue braces. She has hot pink headphones and wears a cyan jacket. She seems to always bring a hot pink smartphone with her.

Courtney's only multimedia appearance thus far has been The Angry Birds Movie 2. She seemingly replaces Ross as Leonard's helper. Her role in the film is fairly small.

Courtney appears in the "Enter The Volcano" and "The Frozen Heart" episodes in this game. Her ability is a reskin Matilda's, where she is inside Harvey and, when the screen is tapped, will fly out from the bottom of Harvey, like Matilda's egg bomb, but when she explodes, she will still roll around like a corpse bird.

Courtney's first game appearence was in the cancelled Angry Birds Tennis where she was an opponent. Like all the characters, she used a new 3D model. She played tennis in the same way as the other characters, but her special power is unknown as she was unplayable. 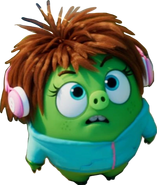