Pigeon (Columba Livia)
Dalton is an Angry Birds Evolution bird that can be obtained at any time in the hatchery.

Dalton by name, daredevil by nature. There ain't no road or bird he can't ride!

Dislikes: peckholes on the road

He is a strong yellow bird with large wings that have two brown stripes each, dome-shaped head with a orangeish red beak with a long top part and a longer bottom, brown moustache on the top that leads to a mutton chops, bald head, small almost closed eyes with brown irises, bushy black eyebrows, large feet of the same color as the beak and large triangular tail made black black long feathers.

He wears a black jacket with a yellow arrow badge, a 23 badge, 66 badge, yellow M and O letters on a yellow border square, metal zipper and Flock of Doom written behind it. He also wears two black rings on the wing finger, one with a Support 81 badge and another one with a pig skull, and wears a white anklet with 9, 201 and DN written on it.

His moustache is now bushier and expands to a big beard on the bottom of the beak, there's now black mohican with a white front , there are two brown wing-shaped tattoos on the sides of the torso, there's a scar on his right eyebrow and he is now grimacing. He now wears a silver chain and black fingerless gloves.

He had red eyebags, pink bandage on top of the beak and brown cross tattoo on the center of the torso. He was grimacing with teeth and his eyes were fully white.

Dash through enemies, dealing 58 damage and pulling enemies in.

Dash through enemies, dealing 75 damage and pulling enemies in.

It costs 200 Red Evolution material to evolve him. The income of Red Evolution Material and Coins when selling him varies according to his level. 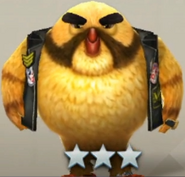 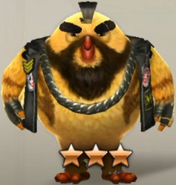 As an Spectator.
Community content is available under CC-BY-SA unless otherwise noted.
Advertisement