He is possibly a light blue Plate-Billed Mountain-Toucan, that has a yellow beak with a red spot, yellow feet, black tail,  purple feather hair with reds stripes and a wears a brown hat with a white and black checkered belt.

He seems to love to play his saxophone but sometimes is interrupted, such as the time Red shoved an apple on the saxophone.

He also likes to enjoy Happy Hour with his friends, as he is seen drinking coconut water on the Bar, he waved at Brad, which Red thought he was waving to him. He doesn't seem to have a hostile relationship with Red.

He appears in the game since the Jungle part. He has the same appearance as the movie.

In the stage, he keeps playing his saxophone, which makes wind that can push the characters to other places, for good or not. He can be defeated. At Piggy Island, Epic Sax Pig replaces him.

He also appears playing some levels and competing with the player (Only as an icon). 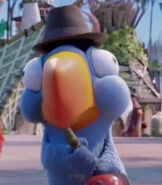 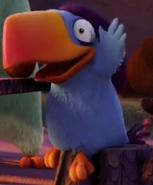