Death Star is the second episode of Angry Birds Star Wars, while the previous is Tatooine and its next level is Hoth. Like its predecessor, this episode also contains 40 levels from level 2-1 to 2-40.

This is the first episode that presents Lard Vader as the mini-boss and main boss.

Level 2-11: The Millennium Falcon flies into the Death Star.

Level 2-40: The Birds find the nasal core and blast it to destroy the Death Star.

Level 2-25: Vader levitate some blocks and pigs with his power. You have to defeat Darth Vader and all minor bosses within five birds to win.

In Episode IV: A New Hope, the Death Star served as a space station of the evil Galactic Empire. It was a spherical structure that resembled a moon, and functioned like one. It had the ability to control its gravity and inertia, allowing it orbit any planet at will, or remain stationary. It also held a large cannon located at a "crater"-like intrusion that could easily destroy planets. It was eventually destroyed by Luke Skywalker when the Rebel army attacked.

The Death Star would eventually be rebuilt in Episode VI: Return of the Jedi. During the events of the story, it was still under construction. However, to prevent the Rebel Army from interfering again, the second Death Star was protected by an impenetrable shield on the nearby forest moon of Endor. This version retains a fully functional crater-like cannon, even while being under construction. Even with all of these new defense systems, the Rebels were still able to destroy it. 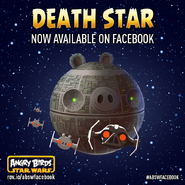 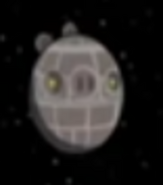