The player has to engage 1 Desert Pig, 2 Bird Catchers and 1 Lightning Pig..

The player has to engage 5 Mummies..

Warning #1: Be careful! Albeit having a troop of "Mummies" in the third wave, they will have a 5% chance to stun you for 1 turn! If you are using Matilda, and she is not in Princess, you must wear her in Princess so she can heal which bird got stunned, and after, they will be cleansed.

Warning #2: Be extremely careful! The Lightning Pig may activate "Fully Charged", which all attackers receive 50% more damage! If you are not using The Blues, you must use them as Tricksters, so you can dispel one pig each (only if there are two pigs in the battlefield).

You can choose Red in Samurai, Matilda in Druid and Bomb in Pirate. Attack every turn in the first wave (except Matilda, if the birds' health is full, attack with her, if not, heal with her). At the second wave, attack every turn (Desert Pig first, Bird Catchers second, then, Lightning Pig) When Lightning Pig is almost about to attack, use Red's secondary skill. If the birds' health is full, attack every turn with Matilda. If not, heal with her to all birds. Don't use the Rage Chili in this wave. Then, at the last wave, immediately give the Rage Chili to Bomb to explode the Mummies. Then, attack every turn (all mummies). Repeat this over until all of the Mummies have been out of health completely.

Mummies can stun your birds, so defeat them as fast as you can. That's not even counting the fact they are Undead. 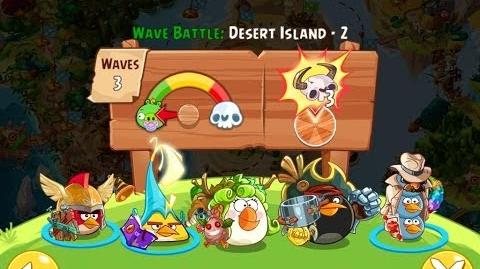 Retrieved from "https://angrybirds.fandom.com/wiki/Desert_Island_-_2?oldid=220041"
Community content is available under CC-BY-SA unless otherwise noted.