Eagles are one of the three groups of extras in The Angry Birds Movie 2 (in addition to birds and pigs). They are birds living on Eagle Island. Almost all of them have common characteristics and live together under the direction of their, leader Zeta.

The eagles live mainly on Eagle Island. They have mostly not very bright color: various shades of brown, gray, and white. They also have powerful beaks that bent at the end, large muscles (though not always), and large wings that allow them to fly. They are resistant to the cold climate of their island. Among the eagles, there are two notable exceptions: Mighty Eagle, unlike other relatives, lives in solitude on Bird Island, and Zeta is the only one of its kind who has a bright purple color.

Most eagles have a trusting relationship with each other, for example, as shown when Brad Eagleberger gave duty to Carl before going to the bathroom, and they respect their colleagues at work, but they are suspicious and cautious of unknown living beings. Some of them are afraid to take the initiative because of the threat of torture, and therefore they easily obey the orders of their common leader, the Zeta.

Most of the guard eagles are more likely to take action sooner than speculate, but there are some exceptions, for example, when guarding the entrance to the base, Jerry immediately recognizes that Harvey is a costume, but in the absence of the same opinion, Carl agrees with Jerry and quickly loses initiative. The scientific and engineering staff of the base, in turn, headed by Glenn, improves the superweapon and ice balls in a rather rapidly short time, although according to preliminary forecasts of Glenn himself it would take two weeks, which indicates the presence of a high level of intelligence and quick wisdom to create such a thing over a few hours.

Also, most of them are very fond of having fun together and arranging various entertainment events, such as parties or dance flash mobs. The wisest of all the eagles is Mighty Eagle, who is very smart and powerful, but didn't live with his fellow species, due to being afraid of Zeta, but  the eagles later started living with them after Zeta married with him. 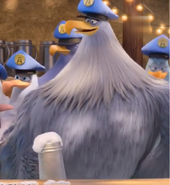 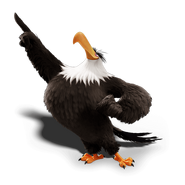 Star Quarterback.
Add a photo to this gallery
Retrieved from "https://angrybirds.fandom.com/wiki/Eagle?oldid=256397"
Community content is available under CC-BY-SA unless otherwise noted.