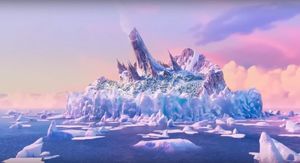 "That image in your hand is Eagle Island. And those are eagles."
— Leonard, The Angry Birds Movie 2

Eagle Island is an island that first appeared in The Angry Birds Movie 2.

This island is replete with snow, ice and frozen terrain. It is infested with seals, and fish are also known to live there as well. However, its environment and ecosystem is not completely undisturbed, as one of its inhabitants, Zeta, has somehow gathered significant resources to design an abode more technologically advanced than the primitive structures built in Bird Village on this island. At the center of the island, there is a hollowed-out volcano-like structure that houses Zeta's ice ball cannon. The island is not too far from Bird Island, as it was demonstrated to be in range of that weapon. There is a computer room near the Ice Ball Cannon, some dungeons where scientists are trapped in, the Regal Eagle and Bathrooms.

After being spurned by Mighty Eagle, Zeta gathers a flock of eagles to her side on Eagle Island, spending years during the Battle of Piggy Island , designing a powerful superweapon in secret that would destroy the neighboring Bird and Piggy Islands. Once the weapon became operational to some extent, Zeta used it to disrupt and effectively end the war by threatening both Birds and Pigs, destroying chunks of their homelands. In response to the attacks, the two decided to forge an alliance and stage an assault on Eagle Island to shut down Zeta's superweapon, and succeed in doing so. Following its destruction, Zeta and her eagles abandoned the island to reconcile with their fellow Birds. Later in the movie, Mighty Eagle and Zeta got married on the beaches of Bird Island.

Eagle island is one of the most advanced islands technologically, even being slightly more advanced than that of Bird Village. There is no village, but rather a complex inside of the super weapon.

Known inhabitants of the frozen island include:

The ice cannon is a powerful superweapon constructed by Zeta inside an inactive volcano on Eagle Island that would be instrumental for her conquest of Bird Island and Piggy Island. Zeta hoped to accomplish her goal by upgrading the cannon so that it would inflict greater damage to the islands with emulsified lava ice balls, but she was only able to launch a light volley of them as a show of force before the Bird-Pig alliance's strike team destroyed the weapon just as it gathered enough ammunition in ten minutes' time for a full-scale bombardment.

"If you look closely, you can see that [the ice cannon is] powered by air pressure. Moisture around a composite volcano instantly vaporizes, sending a plume of highly pressurized steam to the surface. That steam is contained by the pressure chamber."
— Silver, The Angry Birds Movie 2 To hold a large amount of ice balls that would function as its ammunition, the ice cannon has a long, spiral track that winds up the shaft of the volcano. At the top end of the track, there is a machine that generates large bubbles that are instantly frozen into large ice balls in mid-air. An additional upgrade to the cannon has the ice balls pass through lava injectors on a slow-moving conveyor belt that turn them into lava-ice balls via emulsification, before traveling down the start of the spiral track to be loaded into the cannon. The lava injectors siphon lava from the bottom of the volcano via large tubes that line its shaft.

The cannon itself uses a large amount of air pressure generated from instantly vaporizing moisture inside the volcano to provide most of the power that propels ice balls through the cannon towards its intended targets. Such air pressure is contained in a separate chamber below the muzzle that is regulated by computerized systems that consequently allow the user to fire it at will, as well as adjust the cannon's angle to fire at different targets. A large red button placed on the cannon floor and wired to the cannon must be stepped on to fire the missiles.

"You all had the chance to evacuate. But for some reason, you didn't!"
— Zeta, The Angry Birds Movie 2 The cannon was constructed out of Zeta's desire to destroy other islands to expand her frozen tropical paradise with the help of various eagles. The first known use of the cannon came during the Battle of Overseas Pranks, where it was fired upon Piggy Island. The foreign nature of the missile prompted the island's ruler, Leonard to call an emergency truce with the Birds and investigate who attacked the Pigs. Zeta then fired another missile onto Bird Island as well, intending to destroy it.

Later on, as the Birds and Pigs were forming an alliance and a specialized strike team that could destroy the weapon, Zeta aimed her cannon at Mighty Eagle's cave as a final act of retribution for Mighty Eagle spurning her just as they were about to marry. The Birds and Pigs happened to be there at the moment of impact, coming up with a plan and were forced to evacuate.

By this time, Zeta hoped that her powerful weapon would intimidate the islands' inhabitants into evacuating so that she could take the islands as her own, but after they chose to stay in hopes of the alliance stopping Zeta, she then orders her lead scientist Glenn to begin working on an upgrade to the ice cannon so that it would turn ice balls into more dangerous lava ice balls. She then insisted that the upgrade be completed in less than 24 hours and warned that those who failed would end up like Steve again, frozen, as Glenn had already experienced this.

The upgrade was completed by the time the Bird-Pig special forces arrived onto the island and begun their mission to destroy the cannon. After Hank captured Red and Silver, with Debbie arranging for their confinement by freezing their extremities to air mattresses, Zeta then told the two about her plans and demonstrated to them the new deadly capabilities of her upgraded cannon with a light volley on both islands, significantly damaging Bird Village and Pig City.

Confident that the new upgrade works, Zeta gave a speech to her eagles, reminding them about how close at hand their vision was, then begins loading up the cannon with enough ammunition for a full-scale bombardment to finish off both islands, a process that would require ten minutes. Red and Silver then free themselves from confinement and reunite with the rest of the special forces for a renewed attempt to destroy the cannon that called for the two to use a vent system to reach the top of the track, freeze themselves in a bubble to commandeer an ice ball and try to run it down the track fast to crush the cannon, with the Pigs using a manual cutoff switch at some point down the track to derail the ball.

The plan fails after the switch breaks and the ice ball used by Red and Silver only ends up denting the cannon after being derailed with Garry's eagle detector, shattering. At that point, the cannon now had enough ammunition to launch the bombardment, but then Silver comes up with another plan to stop it: call on Chuck to tie her superstring across the cannon muzzle so that when Zeta finally fired the weapon, it would snare the missiles and drop them back inside, destroying the cannon. This succeeds with the help of some Hatchlings and Piglets who secured the string as it frayed high up in the air.

The scrolling portion of the end credits of The Angry Birds Movie 2 is set against the background of one of the tubes leading up to the lava injector, although this is not exactly true as the "lava" constantly changes color, including colors that weren't in the injector's lava tubes.

The idea of using an ice cannon in human history dates back to the 18th century, in which it is claimed that Russians developed and used such a weapon in warfare. However, five years before the film was released, the Mythbusters demonstrated that such a weapon would not be viable because it was not durable in the fifteenth episode of the series' twelfth season.[1]

Eagle Island appears as a location in Angry Birds POP!.

Eagle Island appears as a location in Angry Birds Blast!.