Earl is a country minion pig, that only appears in the The Angry Birds Movie. He is be voiced by Blake Shelton, and sung a song titled "Friends".

Earl appears as a minion pig with a black, unbuttoned sleeveless coat and black hat, carrying a guitar.

A talented musician, Earl was among the Pigs commissioned to entertain the Birds during their visit to Bird Island. He sang the song, "Friends" during the night of the welcome celebrations. A day or two later, Earl joined a few other Pigs in a tour of Bird Island led by Stella.

Not long after the Pigs raided the Birds' Eggs, Earl tragically became one of the earliest casualties of the Battle of Pig City, blasted by Matilda's fireball assault in one part of the City while he was nonchalantly serenading other Pigs who were excited by the day they would feast on the Eggs they captured. 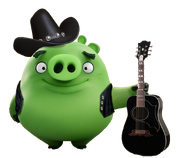 Retrieved from "https://angrybirds.fandom.com/wiki/Earl?oldid=227265"
Community content is available under CC-BY-SA unless otherwise noted.