He is seen to be extremely carefree. When he asked Red how was he doing, he felt shocked. He loves his family and his work.

Wife of the Early Bird 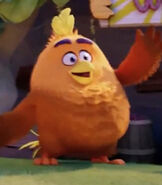