18
Easter Eggs is the fifth holiday-themed scenario in Angry Birds Seasons. It is Easter-themed and has small Easter eggs as additional items that can be destroyed for 1000 points each. Easter Eggs has the same basic format as Hogs and Kisses and Go Green, Get Lucky, but the player must follow Angry Birds on Twitter instead of liking it on Facebook to unlock the three last levels. Unlike the rest of the Seasons episodes, Easter Eggs has 10 Golden Egg levels. When the player finishes the levels they then find a picture of Red, Matilda, and Chuck standing in the front of their eggs with the King Pig laying next to a smashed Easter egg.

CHEEP TRICK!
Spring had sprung and the Flock thought they were onto a winner. They'd found a bunny-rabbit shaped clearing on the edge of the Slingshot Woods! Knowing the woods gave the pigs the heebie-jeebies, the birds set up nest among the daisy cups. Imagine their panic when they looked down at the nest and saw that the pigs had replaced the eggs with painted mud replicas! Red immediately scrambled the birds to get the real eggs back.

Terence as an Easter Egg in the credits.

Jay on a Easter Egg in the credits.

One of the Easter cards with Terence looking at Striped Bird

A golden egg level that features a structure that resembles YouTube's logo. 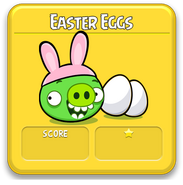 When you Complete all the Levels

When you get 3 Stars on all the levels

The Egg you receive after completing the episode