The player has to engage 4 Stick Pigs and 1 Rogue.

The player has to engage 1 Brute and 2 Rogues.

The player has to engage 2 Rogues, 2 Bird Catchers and 1 Rogue Leader.

Choose Matilda in Druid, Red in Samurai and Bomb in Pirate. Attack every turn at the first wave (except Matilda, when the birds' health is full, attack with her and if not, heal with her instead of attacking). Don't use the Rage Chili in this wave. Repeat this until you win the first wave. When you enter the second wave, use the Rage Chili on Red. Then, when the Brute is about to attack, use Red's secondary skill on the target that the Brute chose to attack. Don't use the Rage Chili for the second time in this battle. At the third wave, use the Rage Chili for Bomb to explode all those pigs. Then, attack every turn again except for Matilda if any of the birds' health is not full. Repeat this until you win or lose.

This level should be simple enough for you. Any basic strategy that was used earlier in the game can also be used here. 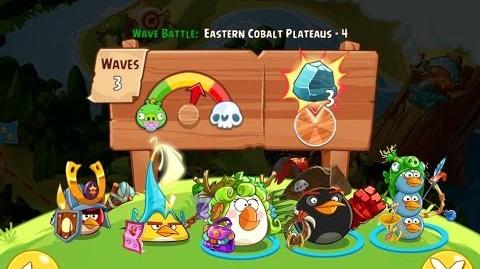 Retrieved from "https://angrybirds.fandom.com/wiki/Eastern_Cobalt_Plateaus_-_4?oldid=220474"
Community content is available under CC-BY-SA unless otherwise noted.