Template:Epic Infobox Level Eastern Sea - 2 is the second level of Eastern Sea. This wave battle will feature lots of different pigs to fight.

The birds have defeated the pigs but in front of them is the mine field with bombs floating on water! Then a fly flies and lands on one of the bombs and the it explodes. Red cries because he doesn't want to die with the bombs. The Royal Guard which is next to the catapult laughs. So how are we going to get pass the mine field? Then, they hear Professor Pig's voice again. He says that if you want to get pass the mine field, you must get a submarine and dive deep to avoid the bombs which is floating on the water. But the Submarine Boss is the one who owns the submarine. So we must go there and attack him to steal his submarine.

Stumble - The pig stumbles and does nothing. Stupid pig.

Incompetent Minions - Passive: Damage increased 25% for each knocked out ally.

Restore Order - Target is healed 75% of all damage it deals. Lasts 3 turns.

Stumble - The pig stumbles and does nothing. Stupid pig.

Choose Red in Samurai, Matilda in Druid and Bomb in Cannoneer. In every waves, attack every turn with Red and Bomb, then, heal with Matilda if the birds' health is not full, otherwise, attack with her. When, the Rage Chili is full, do as what we said at the "Warning". Also, protect the birds out of Big Sailor's strong damage by Red's secondary skill. Repeat this over and over until you win the entire battle or lose the entire battle. 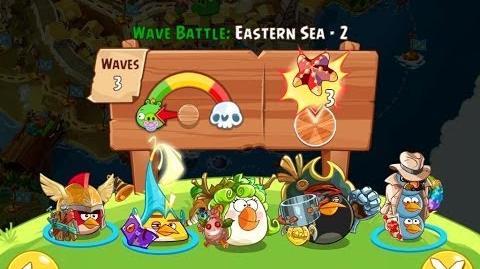 Retrieved from "https://angrybirds.fandom.com/wiki/Eastern_Sea_-_2?oldid=233467"
Community content is available under CC-BY-SA unless otherwise noted.