The EggBots are the eggs when the EggSpark hit Piggy Island.

The EggBot are bipedal high-speed machines, which have plasma guns similar to aircraft turbines on the sides of the warhead. In size, they are almost one and a half times larger than the Transformers. On their head, there is one egg.

Unlike the normal eggs, the EggBots are evil.

The EggBots are the de facto main antagonists of Angry Birds Transformers. If the player intercepts a level, one of the Eggbots may appear in the player's path, infront of them. They can shoot them for coins.

In Angry Birds Stella, the EggBots made a cameo appearance in Stella Finds the EggSpark, to promote Angry Birds Transformers (see above).

In the Angry Birds Transformers comic series, three eggs appear after contact with the EggSpark in an unsuccessful attempt by transformed pigs to steal them. After that, the eggs grow thin metal limbs, and they are taken to create copies of their own kind in large quantities, as well as transform surrounding objects. Over time, they increase in size, they have a mouth, and eggbots acquire the same appearance as in the game. After sending the EggSpark together with Energon Starscream into space, the number of eggbots decreases to three, and Piggy Island acquires its original appearance, but the remaining robotic eggs begin to re-mechanize the environment. 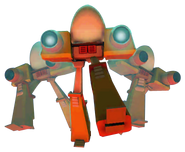