Canary
El Gigante is an Angry Birds Evolution bird that can be obtained at any time in the hatchery.

El Gigante is, without a doubt, the Eighth Wonder of the World.

He is a fat yellow bird with a large head with an orange round short beak, small eyes that have blue irises, beige unibrow that leads to an u-shaped moustache on top of the beak, large chin, beige feather mane and beige feather bead mutton chops on the sides. He also has a light belly with breasts, small small wings with brown tips, small orange feet and a small tail with some beige feathers.

His mutton chops are now longer with longer feathers, his chin has a bit of beard, his tail feathers are longer and it has more feathers, and there are two brown feathers on his left cheek. He now wears a silver chain with a silver skull pendant.

Based on Big Daddy from BioShock, he now wears a beige dome-shaped helmet with four yellow lights that have metal frames, a glass dome-shaped visor with a bad face drawn on it and a golden frame, a beige frame, black metal bars, two glass tubes on the bottom, black round metal cage behind and long beige feathers sticking out of it. He also wears brown suspenders with metal buttons that lead to brown pants and to two silver gas tubes, a small one with silver bars and a long tube, and another with four ripples and a red valve on the back.

The moustache is now a large brown feather beard and the Skull pendant has now an anarchist A on its forehead and a scar on its left eye. He now wears a patched orangish yellow sweatshirt with brown borders, a hood that has two orange stripes behind and a hole where the mane is shown that is cornered by an orange stripe. He also wears a black bandanna with white lines, a red round pin with a white star and a black one with a white anarchist A symbol, a brown metal bracelet with white spikes on the left wing and brown pants.

There was a X-shaped bandage on the left of his forehead, his eyebrows were bushier, the bandanna had star symbols and he had black hair feathers with purple tips.

Dash through enemies, dealing 142 damage. Killing an enemy marks all others to receive 50% more damage from yellow birds next turn.

Dash through enemies, dealing 459 damage. Killing an enemy marks all others to receive 50% more damage from yellow birds next turn.

Dash through enemies, dealing 517 damage. Killing an enemy marks all others to receive 50% more damage from yellow birds the next two turns.

Dash through enemies, dealing 517 damage. Killing an enemy marks all others to receive 75% more damage from yellow birds next turn. 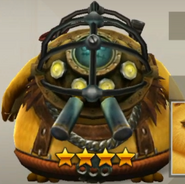 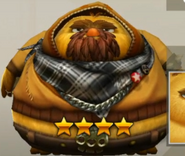 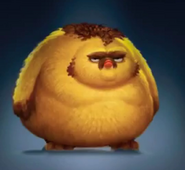