Male and Female
Elephants are animals in the Angry Birds series.

They are one of the largest animals in real-life and the African elephant is the largest land animal on the world.

The ones that appear in the game are from Africa.

In Angry Birds Seasons, Elephants appear in The Pig Challenge Elephant Day Level, where they are made out of wood. Some are throwing water with their trunks or swimming.

They first appear in the Elephant Day Tournament, where the calves were captured by the pigs and the birds need to rescue them with the help of the elephant parents by breaking the metal cages.

They first appear in level 1 of the tournament, there are 3 calves scattered around the level in a cage while the parent is helping the birds by holding the slingshot with the trunk and giving seat to the birds.

The cages are hard to destroy, but Bomb or Terence can destroy it easily, the elephants will automatically go to a bush and give 5000 points. Sometimes, such as in Level 1 of the August 7th 2017, the elephants can activate something, in which in the level above they throw stones. 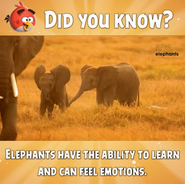