19
Fairy Hogmother is the twenty-fourth episode in Angry Birds Seasons. It is the first official episode of the Season 2016 package. It was released on February 11, 2016, and is the second Valentines-themed episode for Fairytales. The first being, Hogs, and Kisses.

The episode came with 19 levels based on fairy tales. The episode introduces a new "Last Chance" option: when they are no birds left, the player can add three Reds or buy a Telebird Power-up (Not if the player already has). However, they cost 90 coins.

Prince Porky appears in the episode's button and the piggy snail from Pig Plot Potion appears in the level select, but none of them appear in any level.

The cutscene shows when the player completes level 1-19

It shows Terence and Rapunzel Matilda falling in love while watching the horizon. 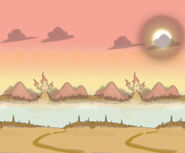