Not to be confused with Big Pig from Angry Birds Stella.

Large Strength and bounce (Every instance)

Fat Pig (also known as Big Bork) is a giant-sized pig in the Angry Birds franchise that first debuted in Angry Birds Space. He combs the universe looking for cosmic food to continually increase his size. He is a massive pig with spots all over him, similar to Terence. He is first found encased in a large planet of ice in Cold Cuts. He then breaks free from the planet and moves to Utopia to satisfy his stomach.

His first official appearance in the games is in level 4-10 (Utopia) as a regular character. He is smaller than he is in 2-20. He unofficially first appears in level S-4. Despite his extreme size, he is easily popped. On the Angry Birds Facebook Page, a picture shows that Fat Pig has grown larger because of it eating more Utopian food. Another thing to note about Fat Pig is that he resembles the original/old designs of the Bad Piggies than the Chrome design.

The Big Burp, which is the Big Bork boss seen during the beginning cutscene, awaits the player on level 4-30, in which he is large-sized and serves as a boss. Like its fellow pigs on Earth, the Big Burp is also unintelligent, as it eats everything in sight, allowing hazardous objects to easily harm it.

The player must wait until the Big Burp rotates so that the desired hazards can enter its mouth. The player can either knock asteroids into its mouth, feed it burnt popcorn by hitting the popcorn generators, or even hit the Big Burp with the Birds themselves. However, only Bomb and Terence will do any noticeable damage. Continuously feed the Big Burp hazards until it coughs up an eggsteroid, which cannot be obtained.

In the ending cutscene for Utopia, it was revealed that the Big Burp had consumed the eggsteroid belonging to the Ice Bird. Coughing up the eggsteroid reduced his size to a mere Large Pig with spots.

The Big Burp is one of the three bosses who have achievements named after the respective bosses, along with Handy Man and Sub Pig.

El Porkador is Fat Pig's villain identity, his main enemy is Wingman and commits crimes around cities, such as robbing banks. He is used by the pigs as an weapon to defeat the birds and steal the eggs, however, Terence is always there to help and defeat him.

In Angry Birds Space, he is first found in Cold Cuts.

He first appears in the El Porkador! episode from Angry Birds Toons.

He also appeared in the Junk Food Tournament, where he is strong and burps when defeated. In this tournament, his appearance is different, he lacks spots and his body form is oval-shaped rather than a circle.

A similar fat pig appears in Piggy Tales: Third Act. It seems that he loves pancakes and does not dance the Tango

He first appears in Batter Up, eating pancake dough that Chef Pig makes.

He then reappears in Let's Tango trying to dance the Tango with a regular-sized pig.

He then reappears again in For Pig's Sake, sitting in a chair and obstructing the view of a pig.

His last appearance is in Final Curtain, being attracted again by pancake dough.

He appears in the King Pig Golden Egg level. He portrays Terence in one of the

He has the same strength as Terence and makes a pig sound like all of the playable pigs.

Fat Pig appears dressed as El Porkador in the Comicon Pig Day level. He is easy to be popped and He has the same strength as he has in Space. Unlike in Space, he doesn't have facial expressions. He also appears on the 11th level of the episode On Finn Ice and in level 4-11 of Ham Dunk. 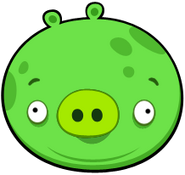 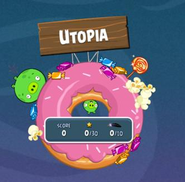 Fat Pig seen on the planet of Utopia. 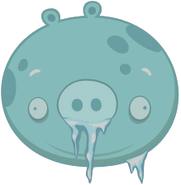 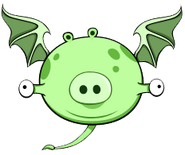 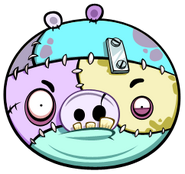 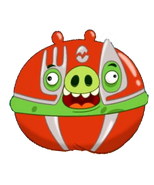 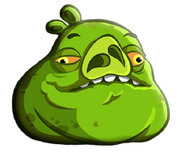 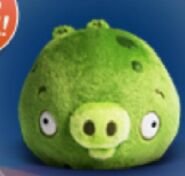 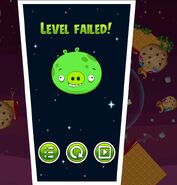 Fat Pig when the player fails his boss fight. 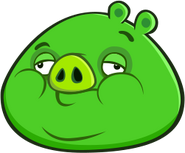