Female
The Female Pigs are pigs that appears in the Hogs and Kisses credits, the Angry Birds Bing Videos, two in Smoothcheeks' imagination in Love is in the Air, an episode of Angry Birds Toons, the original Angry Birds' King Pig mode, Angry Birds Star Wars II, in which one of the playable pig characters is Zam Wesell, Angry Birds 2 as Lady Pig, very known appearances in Angry Birds Friends tournaments, Tourguide in Angry Birds Evolution, and Courtney and other female pigs in The Angry Birds Movie and its sequel.

This Female Pig is the size of a large pig and wears a pink bow and eye make-up. She is seen in the credits of the game and in promotional images, as well as appearing in the game. A plush toy of this character was released.

One female pig that appears is King Pig's vision of a cabbage. The pig has long blonde hair and a small crown. The second female pig is what King Pig sees Corporal Pig as; an opera singer with long orange hair and a helmet covering the eyes. The third is the Witch Doctor Pig. She appears in the episode Pig Possessed, brewing in her cauldron and having her tent destroyed. She then gets her chicken leg back, that King Pig ate. She is a pig with eyelashes, black hair, and wears a red hat and a golden ring on her left ear. Golditrotters, which appeared in the episode of the same name, but is merely fictional. (Or not) She has gold locks and a red band. However, there are more female pigs in Angry Birds Toons but they don't have a clear dimorphism.

A female pig appears in King Pig Mode as a replacement for Stella. She looks exactly like the female pig from the Hogs and Kisses credits, but with pink circles under her eyes. 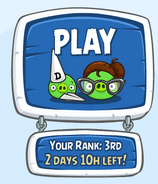 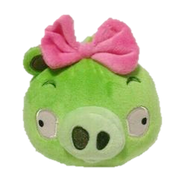 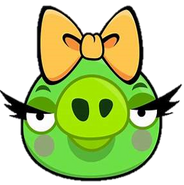 Courtney is a female pig

Portrait of a Queen Pig from the movie 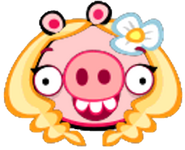