Flock Favorites is the third episode of Angry Birds released on July 22, 2014. This episode consists of 15 levels created based on votes taken of fan-preferred Angry Birds levels [1], while another 15 were released June the following year, and all levels in this episode are recognized as the 29th theme. The level themes are all pulled from several past episodes, such as Red's Mighty Feathers, Surf and Turf, Poached Eggs, Short Fuse, Bad Piggies, Mine and Dine and Danger Above. On June 23, 2015, 15 more levels were added in the episode in version 5.1.0.

The episode is based on a survey, which asked the players what their favorite levels were, and from that survey episode, 15 levels were created. Another 15 levels were released in June the following year. [2]

Each level is based on the themes of previous episodes.

Countdown with "Something Big" 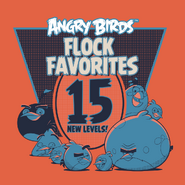 Retrieved from "https://angrybirds.fandom.com/wiki/Flock_Favorites?oldid=267544"
Community content is available under CC-BY-SA unless otherwise noted.