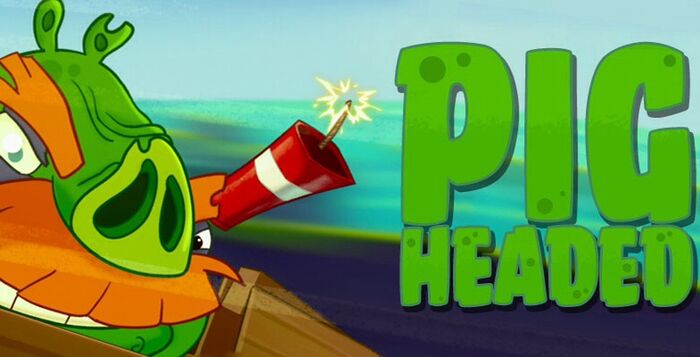 "Mud, stinky puddles, rubbish rotting in the street - this city gets more disgusting every day... I love it!"
— Foreman Pig, Angry Birds Comics #8

Foreman Pig, also known as Moustache Pig, Grandpa Pig or Boss Pig,[7] is a character that appears in the Angry Birds series. He is a pig and a member of the Piggy kingdom.

In his original design, Foreman Pig is a wide, oval-shaped, lime-colored pig with two large eyes with black pupils and a large orange moustache underneath his snout. Originally, he had two floating, white eyebrows, though they were later changed to orange ones. In Angry Birds Toons, this design was slightly changed to be triangular. He now has green skin with several darker spots, and his right eye has a cyan pupil, as if he had heterochromia.

In The Angry Birds Movie, Foreman Pig was given an anthropomorphic body. He now has an egg-shaped torso that is connected to this head without a neck, and his skin is lime once again. In addition, he was given a yellow-colored hard hat with a blue pig snout on it. He also wears a black belt with brown pockets and a brown bag that has large, dark gray nails in it. Future releases would occasionally switch between this newer design and the one from Angry Birds Toons.

When he was younger, Foreman Pig was much smaller than now, having a square-shaped body with a soft, lime skin. He had wider eyes, and a smaller moustache.[1]

Foreman Pig is a dedicated and responsible person. However, this sometimes makes him bossy, as he is constantly giving the Minion Pigs orders. He is very loyal to his superiors, as he has no doubt in helping King Pig with any problem he has no matter how ridiculous it is. Foreman Pig is also notable for being a very persistent person, as he never gives up, no matter how many times has he failed in something. Nevertheless, he can also be somewhat lazy, as he does not like building and instead sends other pigs to do his job, unlike his ancestors.[2] However, he is very sensible, as being called "ugly" will result in him crying out loud.[6]

Despite him not having inherited his ancestors' knack for building,[3] Foreman Pig is an expert at building vehicles, as he has managed to build his own karts and drive them with ease.[8] Similarly, he could build workable traps within seconds and modify them with no problem.[9] He was also able to build a tank of his with his own resources and some of Professor Pig's blueprints, though he lost control of it soon after.[10] In addition, he is quite resistant, having survived explosions, falls from high heights, and even being crushed.[8]

Foreman Pig is equipped with lots of building and demolition equipment he can use as weapons;[8] according to himself, he always has spare dynamite.[4]

Foreman Pig is incredibly loyal to King Pig. He acts with respect to the monarch, and always tries to find ways to entertain and satisfy him, such as when he wanted to dissimulate a murder case to compensate the destruction of the camera that was playing a detective film that King Pig was enjoying.[11] However, King Pig does not like when Foreman Pig is referred to as his friend.[6] Similarly, Foreman Pig can be annoyed by the monarch's stupidity.