Angry Birds Wiki
Register
Don't have an account?
Sign In
Advertisement
in: Angry Birds Space Episodes, Fry Me to the Moon, Released Episodes of 2012
English

Fry Me to the Moon

SPACE EGG SCRAMBLE
Having rescued Ice Bird from the clutches of King Pig's claw ship, the Space Flock turned their attention to finding the space eggs. After travelling through the wormhole it was said that they could create black holes at will. Ice Bird spotted the shell shockers at the top of a snowy summit, but before the birds could get climbing, Space Foreman Pig appeared in his tractor beam pod. Grinning from beneath his bushy moustache, the old porker trapped the space eggs and zoomed back to the herd.

Starting: The Birds arrive on the moon of the ice galaxy, just in time to witness a Space Egg get stolen by a Foreman Pig.

Ending: The Birds defeat the Foreman Pig and retrieve the Space Egg.

Technically, no new elements are introduced in the episode. However, the pigs in the space bubbles can move.

Fry Me to the Moon contains 10 levels and 2 bonus levels. Most levels are medium but has one hard level: Level 3-10.

Fry Me to the Moon Cut-scene

Fry Me to the Moon End Cut-scene 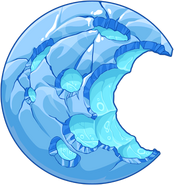 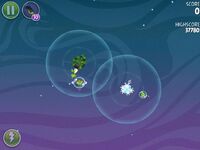 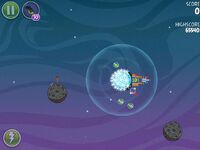 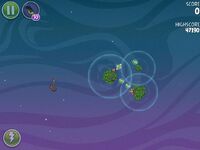 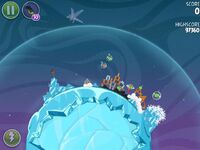 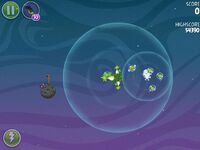 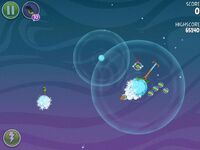 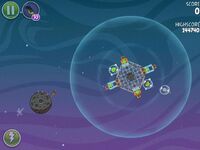 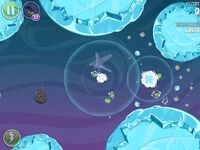 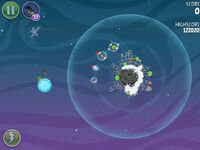 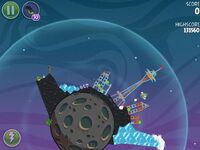