Red Macaw (Ara macao)
Geraldine is a bird in Angry Birds Evolution that can be obtained regularly in the hatchery.

Geraldine is far from being the oldest singer in town, but she’s also the only one who’s a first rate rocker!

There are two spike shaped face paint spots with white lines, her beak has more lipstick and there are shoulder pads on her jacket. She now wears golden chains.

It's the same as her evolution but her beak is painted white, she is more angry and there's a heart tattoo on her left chest. She wears a brown mask with golden goggles with white eyes and a brown armor with golden parts that resemble an owl. The bracelets are now brown with pads.

It's the same has her evolution but her beak is again painted white and there's also a heart tattoo on her left chest. She wears a torn black top hat with a red belt with the same details as the headband, a black monocle with golden windows and a red lens, shoulder pads, black gloves with thorns and a black suit with a red light button with wires and a bunch of buttons below it.

Her beak was white with red lipstick, she was bored as her eyes were almost closed with dark red eyelids, her beak was open with some teeth, her headband was yellow with white Rockband symbols and she wore a black spandex tanktop pants and a black bra with silver thorns that resemble nipples that covers her breasts.

Her suit had breast parts.

Throws an undie, dealing 4719 damage.Hitting a fan makes them run amok, dealing 812 damage to all enemies.

Throws an undie, dealing 4719 damage. Hitting a fan or killing a pig makes the crowd run amok, dealing 812 damage to all enemies.

The bird's fame attracts fans. Hitting a fan increases a bird's damage by 10% times the amount of present rockstars for the turn.

When she is in her first level, it is less than 350, but she can be evolved to surpass this number.

When she is in her  first level, it is less than 160, but she can be evolved to surpass this number.

When she is in her first level, she gives less than 840 Bird Power to the team, but she can be evolved and trained to give more.

The income of Red Evolution Material and Coins when selling her varies according to her level. 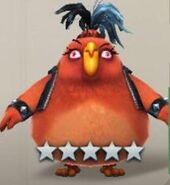 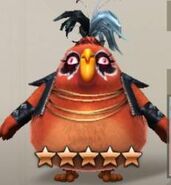 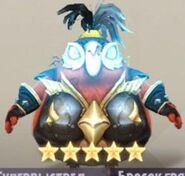 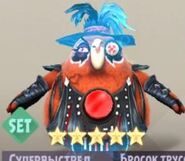 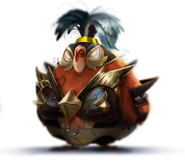 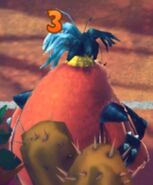