These data are only applicable when attempting the dungeon for the first time. Subsequent attempts will scale the stats based on your current level and whether you chose the Normal mode or the Elite mode.

The player has to engage 4 Ghosts, 1 Ship's Kobold and 1 Poltergeist.. Each enemy's stats are shown below.

The player has to engage 1 Banshee, 2 Poltergeist and 1 Ghost.. Each enemy's stats are shown below.

The player has to engage 1 Undead Pirate Captain and 4 Ship's Kobolds.. Each enemy's stats are shown below.

Note: This strategy assumes you have yet to clear this dungeon.

It is recommended to be at a higher level before attempting this dungeon. Once you have done that, choose any birds you would like (recommended would be Matilda for healing, Chuck for multiple attacks, or Jay, Jake, and Jim as spies for multiple targets) plus your friend's bird (Or Piggy McCool if you don't have any friends). Once that is done, follow the strategy below.

All enemies in this level are undead so it is best to use an attack that can target multiple enemies. Also, the Spirit Caller is a stronger version of the Necromancer, since his main attack can also deal damage over time. 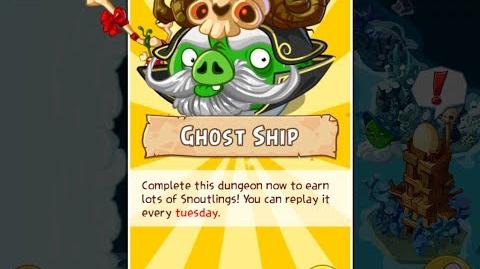 Retrieved from "https://angrybirds.fandom.com/wiki/Ghost_Ship?oldid=260398"
Community content is available under CC-BY-SA unless otherwise noted.