This page is about the promotional character from Angry Birds Seasons. For the character who was called "Girly Bird" on some merchandise, see Stella. For other uses, see Category:Female Birds.

Girl Bird[1] (also known as Female Red Bird or Ruby[2]) is an unplayable bird who appears in the Hogs and Kisses episode of Angry Birds Seasons.

She resembles her boyfriend Red, but has eyelashes, different pupils, thinner eyebrows, lighter spots, and wears a yellow bow on the top of her head (though it is blue in the free version's Hogs and Kisses app icon). She is slightly shorter than her boyfriend.

In the game, she isn't playable, only appearing in the ending cutscene of Hogs and Kisses. In the cutscene, she is spending time with her boyfriend Red while Cupid Pig shows defeat in the background.

In the Facebook version of the game, she appeared in the Bird-O-Matic as character that could be chosen as the avatar. She could appear without her bow and could be dressed with any of the objects and be put in any background. 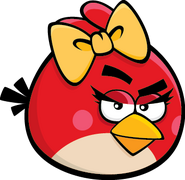 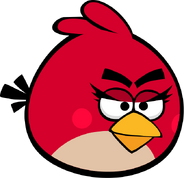 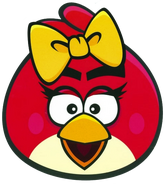 Ruby in frontal and HD

Girl Bird in the end of Hogs and Kisses

Tag of the girl bird plush

Back of the tag

In a publication of the official channel of Angry Birds of youtube, the name of Ruby is confirmed to Girl Bird