Glass, is a light blue block in color and the weakest material that the pigs use for their structures. Among the three kinds of blocks, this one can be easily broken by all kind of birds. Levels with these blocks are often provided with The Blues, as they are very good at breaking these blocks. It is suggested to multiply the Blues in front of the glass block to maintain the greatest strength of the bird. Most birds slow down when they hit glass, but Chuck slows down after only breaking one block of glass.

A weaker type of Glass can be seen in some levels of Piggy Farm and other. Just like Glass it is very fragile. Glass breaker birds can break this type of glass. It's mainly used in the structures as windows or protectors and difficult the access for blocks or pigs a bit. They come in various colors but are mostly teal.

In Angry Birds Stella, Luca is the go-to bird for glass- his Soundwave Shock shatters all blocks in its path of that type.

Ice, a light blue-colored block, is in certain Angry Birds titles the weakest building material alongside or in place of glass. Like glass, the Blues deal high damage to ice. Over the many slingshot games, there have been birds or power-ups with the ability to turn blocks of other types into ice, including Ice Bird in Angry Birds Space, Carbonite Han Solo in Angry Birds Star Wars II, and the Freeze Spell in Angry Birds 2. 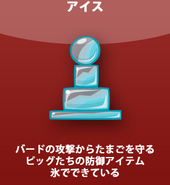 A description of Glass in Japanese 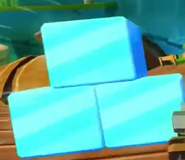