Glenn is Eagle Island's top scientist helping bring Zeta's vision for a superweapon to life. Glenn is understandably nervous, knowing that his past few predecessors didn't keep their jobs long enough to see the weapon come to fruition. Zeta, and especially Glenn, are hoping that this time things will be different.

Glenn is a scientist of Eagle Island as said above, he is goofy and worried, he helps Zeta on her plan of launching Ice Balls to the islands, he often sleeps below his desk on an inflatable rubber mattress, when he needs to urinate, he does it on plastic bottles and hides it inside a ridge. He has grandhatchlings, which he brought them to work, however, it was a nightmare. In one scene, Glenn can be seen singing Baby Shark as well as his workers hanging out with Bomb at The Regal Eagle. 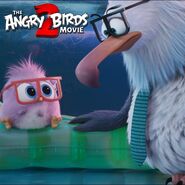 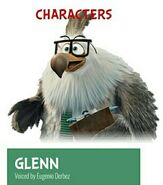 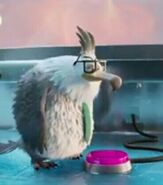