The birds have defeated Pilot Pig so now is the time to get back the Golden Pig Machine, which is still being tied up to Prince Porky's hot air balloon. He tries to pull it up but because it is too heavy, the Golden Pig Machine has been detached from the balloon. The birds got the Golden Pig Machine. Prince Porky then flies away to the Desert Island with his air balloon but when it touches the pointy cactuses, it explodes and he has been stunned. Chuck still does not know how can they get through the Limestone Lagoon to get to the Desert Island. Luckily, Bomb is here to help with his ship. But a pirate from Desert Island jumps in and attack him, make him unable to drive the ship. The ship crashes into the rocks and then it stops exactly at Cornucopia Woods. Bomb needs help to get rid of this Pirate.

The player has to engage 2 Workers and 1 Air Pirate.

The player has to engage 2 Air Pirates.

The player has to engage 2 Air Pirates and 1 Pilot Pig.

Warning: In this level, do not use Chuck to attack. Use his secondary skill on Red if the birds' health is full or Matilda if the birds' health is not full. (You can use Chuck to attack at the first wave).
In the first wave, protect the birds by Red and Matilda's secondary skill if their secondary skills have expired. Then attack every turn, but don't use the Rage Chili at the first wave. Drag it to Red at the second wave if it's full again, and then drag it to Matilda until the third wave, where you also need Matilda's healing medicine in every turn that the Chili's full to heal and cleanse your birds. Repeat this strategy until you win or lose.

Air Pirates are immune to harmful status effects, and they can raise an ally's power by 50%. Pilot Pig can use Weaken to deal more damage to the birds, and his Incompetent Minions passive ability will make him more dangerous! Try using simple attacks, as they can overcome the Air Pirates. 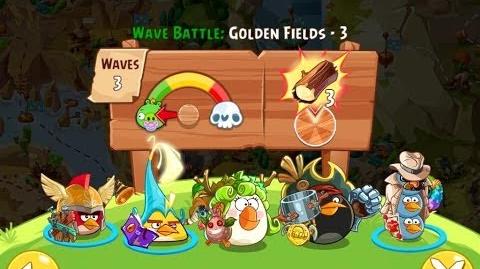 Retrieved from "https://angrybirds.fandom.com/wiki/Golden_Fields_-_3?oldid=217577"
Community content is available under CC-BY-SA unless otherwise noted.