They've got the fans, so the birds went back to Professor Pig's Lab and says to him that we've got the wings, gears and fans. Then, he upgraded the birds' ship into an airship. Now, the birds have to go to Volcano Cliff and rescue Red. When the airship and the birds comes to Volcano Cliff, Prince Porky was scared but he was still holding Red's cage. So the other birds pull Red's cage out of Prince Porky air balloon's hook. After several times of pulling, they've rescued Red out of Prince Porky's air balloon's hook. But Prince Porky still flies away to Mountain Pig Castle, the place that the 4th egg is being kept.

You have to engage 3 Air Pirates and 1 Pilot Pig. Their stats are shown below.

Choose Matilda in Druid, Bomb in Cannoneer and The Blues in Rogues. Heal with Matilda if the birds' health are not full and if they're full, attack with her. Then attack with the others. Always use the Rage Chili on Bomb immediately every time when it is full. Repeat this over until you win or either lose.

You fought them berore, so take them down. 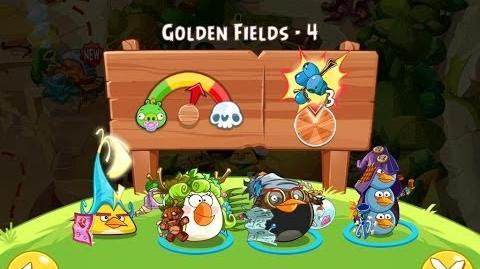 Retrieved from "https://angrybirds.fandom.com/wiki/Golden_Fields_-_4?oldid=220163"
Community content is available under CC-BY-SA unless otherwise noted.