Golden Island is a location that appears in the Angry Birds series. It is an island located on earth.

Golden Island is a tropical island located somewhere on earth. Most of the island is filled with jungles, with a small part of it is composed on swamps. Coastlines are generally large beaches. Perhaps the most notable location on Golden Island is the large volcano where Gale's castle is sitting on.

Golden Island is notable for being home to the Golden Eggs. Its flora and fauna are also unique. At least one region of the island has carnivorous plants and hostile butterfly-like creatures.[1] Perhaps the most distinguishable species that lives on Golden Island are the Critters.

Golden Island appears as the main location in Angry Birds Stella, where Stella and her friends live. At one point, Gale and her minions stole Stella's personal hiking equipment. Furious, Stella came in and made her way through the jungles of Golden Island. Teaming up with Poppy, who had also been disturbed by Gale's minions, Stella continues her adventures. Eventually, the two girls witness the pigs stealing all of their supplies from the Big Tree, though they would later gather them all after teaming up with Luca, Willow and Dahlia. Ending up on a beach, the group rescues the oysters that are kidnapped by Gale's minions and start to go after her, ending up in a cave. 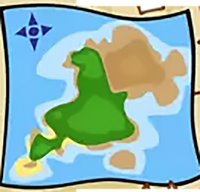