This article is about the Golden Egg level. If you are looking for the character, see King Pig.

The Golden King Pig Level is located in the Golden Eggs section and is only available for iOS, Android, PC and Blackberry Playbook's QNX. It is also available for Angry Birds HD Free (version 1.4.1 only). To unlock it, three stars must be obtained on all levels from Poached Eggs to Birdday Party. An alternative method is to buy the Apptivity King Pig toy. The King Pig Apptivity Toy can be used when playing a level to easily access the Golden King Pig levels. There are many features that include King Pig, Material Mix-Up, Bird Frenzy, and Total Destruction. At first, it was available exclusively to iPad, but on October 9, 2012, the Golden King Pig Level had been updated for iPod Touch and iPhone apps and Android Apps via Google Play and PC. When the player loses, the pig becomes sad; The user needs to play to make him happy.

In Angry Birds Time Travel, the mode is just a button and works the same way but is unlocked differently.

In "King Pig", the birds turn into pigs and the pigs turn into eggs. You have to complete the level by destroying the eggs with your available pigs in the slingshot. The different ways that the pigs use to solve their problems with the unique abilities is humorous, there is a set of pigs that has a splitting ability like the Blues and inflation like Bubbles - the balloon pig even looks like a balloon. And who to simulate Terence than the Fat Pig from Angry Birds Space? The Bad Piggies are playable in this mode, and they have swapped their roles with the eggs, which could possibly mean the Birds had decided to take the Bad Piggies' role by building forts to protect their eggs. The pig with an exploding bowling ball resembles and takes the role for the Matilda, by dropping a bowling ball on the egg fortress. The Balloon Pig will inflate. The Pig with a bow on her head and blush from the Angry Birds Seasons episode Hogs and Kisses produces bubbles like Stella. The Pig with a jetpack speeds up like Chuck. Corporal Pig has a fuse on his helmet, enabling the pig to explode like Bomb. The Pig with a long, fake beak boomerang back like Hal. The small pig actually has two smaller companions to imitate the Blues. The regular Minion Pig cries ''Nyah!'', like Red. The Fat Pig does the same for Terence. This was presumably before there were three eggs left on the island.

"Two materials have been swapped!"

"Beat the level with unlimited birds!"

In "Bird Frenzy!", you will have unlimited birds and you have to complete the level in the amount of time it gives you. Normally the time limit in Bird Frenzy is between 30 seconds for most levels, 40 for some, 50 for others and 60.

"Tap on the level to explode it!"

In "Total Destruction!", you have to complete the level by tapping it to cause small explosions and you only have a limited amount of time to do so. Usually, the time limit is around 10 seconds. 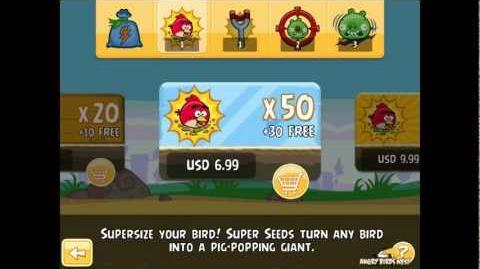 The Blue Bird and the Small Pig

Chuck and the Jetpack Pig

Bomb and the Helmet Pig

Matilda and the Bowling Ball Pig

Hal and the Beaked Pig

Terrence and the Fat Pig

Bubbles and the Balloon Pig

Stella and the Female Pig

Small Pig and the Small Egg

Minion Pig and the Minion Egg

Large Pig and the Large Egg

Corporal Pig and the Corporal Egg

Foreman Pig and the Foreman Egg

King Pig and the King Egg

If you look closely, you can see Female Pig. 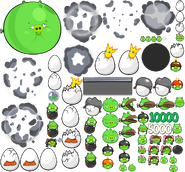 King Pig laughing (when you complete the King Pig level, or you failed Bird Frenzy, Material Mix-Up and Total Destruction)

King Pig crying (when you fail the King Pig level, or you completed Bird Frenzy, Material Mix-Up and Total Destruction)

The Golden King Pig as seen in version 1.4.1 of Angry Birds HD Free