Start a Wiki
The Golden Pig Machine is an item in Angry Birds Epic that the player gets after clearing Golden Fields - 3. It is used to roll for strong weapons and offhand items. The items' strength varies depending on the number of stars on the equipment from 0 to 3 stars. Sometimes the Golden Pig Machine will give items even if the player has it.

The Cheap Roll is worth 3 Lucky Coins. With it, there is a normal chance of getting strong items. It fills up the Rainbow Bar by 1/50, so 50 such rolls were needed, which translated into spending 150 Lucky Coins, to completely fill it up. From version ??? onwards, the player could get one free roll daily and every 12 hours, they could also watch an ad to get another free roll.

From version ??? onward, there is another option of rolling 10 Cheap Rolls for the price of 9 (so 27 Lucky Coins). It essentially is just the Cheap Roll done ten times.

Before version ???, there used to be an option to pay for an expensive roll of 20 Lucky Coins which meant that only 5 Expensive Rolls were needed to max out the Rainbow Bar.

The odds of getting set items were significantly higher.

The Rainbow Bar is a bar that is filled up when doing rolls. If it got maxed out, the next roll was a guaranteed set item. Before version ???, the player could roll on their friends' Golden pig Machine to help fill up their Rainbow Bar as well as their own once a day.

The damage of the weapon/health of the offhand item from the Golden Pig Machine depended on not only the player's level but also on the number of stars given to it. For example, a Paper set item obtained at level 15 would have less health than obtained at level 21. This makes it so that it is more worth to roll for set items at or near the maximum level of 100.

In version 1.0.12 a period called Rainbow Riot was introduced. When active, the chances of getting powerful and set items increased by 3 times (or 5 times from version ??? onwards for logging into the game 21 times in total). Each period would last for 30 minutes (15 minutes pre-version ???).

Legendary Set Items are special weapons and off-hand items that grant each bird a better trait bonus compared to its regular counterparts such as a better critical hit chance and more healing from attacking.

When two matching set items are equipped together, the bird will also unlock a powerful bonus. 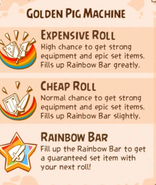 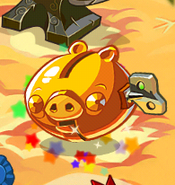 Retrieved from "https://angrybirds.fandom.com/wiki/Golden_Pig_Machine?oldid=248886"
Community content is available under CC-BY-SA unless otherwise noted.