Template:Epic Infobox Level Great Cliffs - 1 is the first level of Great Cliffs in Angry Birds Epic. It is a Normal stage. When this level is finished, the player may spin for 3 Stone. Voodoo Doctor is introduced here.

This Voodoo Doctor is unique as he has an attack that will target any enemy. He will then attack that target for the next three turns (unless it is dispelled which in this case he attacks a random enemy). He also recovers 50% of the damage dealt to himself.

Choose Matilda in Druid, Bomb in Cannoneer and The Blues in Rogues. Heal with Matilda if the birds' healths are not full and if they're full, attack with her. Then attack with the others at your first turn and after the pigs' third and sixth turn. If not, attack with Bomb only and use The Blues' secondary skill on the bird which have the highest current health. Use the Rage Chili immediately on Matilda when it is full. Repeat this over until you win or either lose.

Voodoo Doctor can target any enemy he desires, and hit enemies 3 times, each one healing him 50% of his damage. 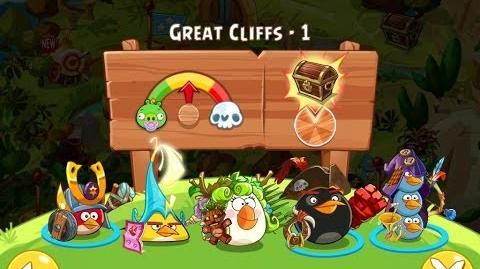 Retrieved from "https://angrybirds.fandom.com/wiki/Great_Cliffs_-_1?oldid=220096"
Community content is available under CC-BY-SA unless otherwise noted.