Green Day was an episode in Angry Birds Friends that promotes the punk rock band "Green Day". It was released on August 20, 2012.

Green Day consisted of 20 levels plus 2 Golden Grenade levels. The Grenade level worked like a Golden Egg. The first Grenade can be found in level 3. The setting in all the levels are at a Green Day concert. The 3 pigs that symbolize the band, as seen in the episode's button, are actually in the Grenade level. They are seen playing with guitars and drums.

On December 20, 2012, Green Day was removed. Even after being removed, the stars and feathers obtained in this episode are counted in the player's score.

How to find the Golden Grenades

There you can see, 3 pigs (seen in the picture on right) in a concert playing the "Troublemaker" song by Green Day. 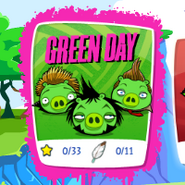 The original look for the episode. 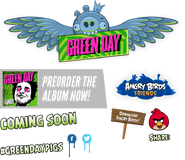 The Green Day Pigs In the event 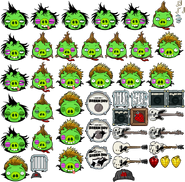