He is the husband of Olive Blue and the father of Jay, Jake, and Jim.

He is a dark blue bird with a light blue belly, yellow beak, and legs, orange circles around his eyes with teal green pupils and dark teal blue hair feathers and tail.

Greg is goofy, calm, happy and lazy, often sleeping at important things. Besides this, he is careful about his sons and loves his wife, he is shown to be a great builder, building things such as a Joy Ride Mighty Eagle Toy and a wooden seat.

Another ability that he has is cooking. He is great at cooking burgers, but sometimes he can't cook them well, because of his sons that sometimes make messes, such as dropping the burgers in the grass by accident or destroying his grill. He also loves to read a newspaper. 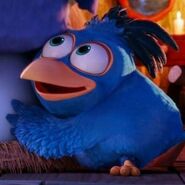 *He is near Dahila and Olive.

Retrieved from "https://angrybirds.fandom.com/wiki/Greg_Blue?oldid=242510"
Community content is available under CC-BY-SA unless otherwise noted.