Angry Birds Wiki
Register
Don't have an account?
Sign In
Advertisement
in: Ham'o'ween, Released Episodes of 2011, Season 2011,
and 3 more
English

For Halloween episodes in other Seasons, see Trick or Treat, Haunted Hogs, Invasion of the Egg Snatchers and Hammier Things.

Ham'o'ween is the eighth Angry Birds Seasons episode, the second Halloween-themed episode and the sixth episode of the Season 2011 package. The setting is a spooky forest, named the 'Square Forest'.[1] The episode was announced on Rovio's Facebook page and a promo video released by their YouTube. Bubbles debuted in this episode.

In the Chinese version of Seasons, the episode is located in the Mystery Area section, and is classified as the fourth episode.

Sometimes King Pig calls off the search for the eggs — that time is called Ham'o'ween. However, the piggies don't get a holiday. Instead of eggs the Minions have to bring King Pig sweets — by the buckey load. They deliver their stolen candy onto a conveyer belt that leads straight into his royal gut-lord's slobbering mouth. One Ham'o'ween the Blues had a fright. Bubbles, the newest member of the flock, had been unwittingly snatched by the swine in a bucket of candy. The orange bird was about to be gobbled up by King Pig as he gorged himself on his stash of sweets. This time it wasn't the eggs that needed rescuing from ending up in Smooth Cheek's belly — it was Bubbles!

As with many other Angry Birds Seasons episodes, Ham'o'ween was advertised with a short animation. It stars the Blues, who were trick-or-treating around Piggy Island, until they found Bubbles in their candy container, devouring the confectionary they had acquired. Bubbles is then accidentally stolen by pigs, who bring the container to King Pig for him to eat. The Blues now must save their new friend from getting devoured by the King Pig. 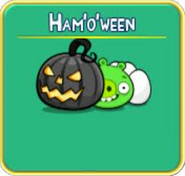 The episode card in the PC release. 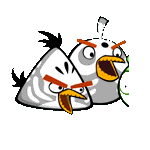 The Skull you get when completing the episode

The Glowing Skull you get after getting 3-staring every level; in the episode