The Ham'o'ween Short Movie is a short animated video made by Rovio as a trailer for Ham'o'ween. It shows how Bubbles joined the flock.

The short opens on a strange mountain trail on Halloween Night. Shadows of Frankenstein's monster, a witch, and a devil are seen moving toward the Mighty Eagle's cave.

Mighty peers out of his cave to see the three shady figures, who are just the Blues in costumes, who are trick-or-treating. After Mighty gives them candy, the Blues continue on their way around the island, until they see a large, orange, blobby creature lurking in the woods. Each of the Blues imagines what kind of monster it could have been, but then laugh it off and assume that it is part of Halloween, and pursue the unknown creature.

The Blues look around the forest for the creature and see that their candy bucket is shaking. They look inside the bucket to find Bubbles, who is happily eating their candy. Suddenly, the Bad Piggies appear, wearing King Pig masks and bringing candy to their fortress. The Blues hide them and the bucket behind a tree, but after the pigs are gone, they realize that Bubbles somehow ended up in one of the Bad Piggies' candy buckets.

When the Blues get inside, they see all of the Bad Piggies dumping candy onto a conveyor belt. The Blues then spot Bubbles, who has been dumped onto the conveyor belt with the candy, as the pigs are unaware of it. King Pig, who is dressed as a vampire, is sitting at the end of the conveyor belt and opens his mouth so that all the candy falls into it. Another pig, dressed as a mummy, turns the lever to "slow".

Bubbles, seeing his favorite kind of candy, and King Pig, seeing it too, both try to get it until the conveyor belt explodes. Bubbles, King Pig and the piece of candy are then shot up into the air. Bubbles and King Pig both lunge for it in slow motion, but King Pig ends up catching it in his mouth.

For the first time, Bubbles actually gets very angry, and uses his power of inflating to enormous size to squish King Pig against a wall, making the piece of candy shoot out of his mouth and into Bubbles's beak, making him happy again and zoom around the room while deflating, damaging the fortress even more, before landing back in the Blues' candy bucket, which was emptied.

The Blues then befriend Bubbles and leave the fortress, which collapses as they leave. 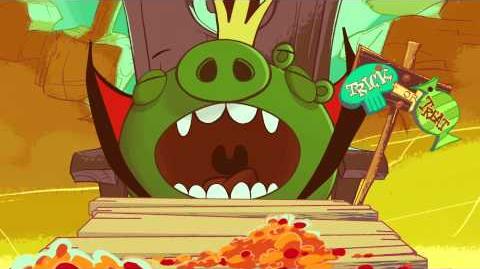 Bubbles, who debuts in the short.

King Pig who debuts in the Ham'O'Ween short.

Early concept of the Pigs' fortress by artist Miguel Moreno. 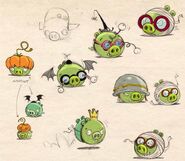 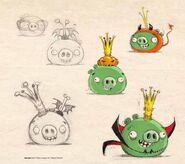