New Bird Wears
Hammier Things is the twenty-eighth episode in the Angry Birds Seasons. It was released on October 20, 2016. It is the fifth official episode of the Seasons 2016 package and is the fifth Halloween-themed episode.

To celebrate Angry Birds Seasons' 6th birthday, from October 21 to 23 2016, unlimited free Telebirds and Shockwave Bombs were given to users over the weekend, but only to who updated from the date shown above.

The episode features absolutely no new objects, only painted ones. It's more of a basic and tutorial episode. The only thing it introduced is new Bird Wear which is listed below:

When the player first presses the play button in the game, the player will go to the first level of Hammier Things if the game isn't connected to Facebook. The levels are listed below.

The cutscene appears after completing level 1-23. 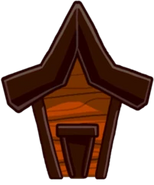 The cabin you get after completing the episode 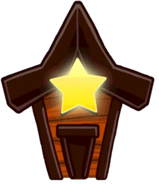 The Cabin You get after 3-starring every episode in the episode
Español Русский
Community content is available under CC-BY-SA unless otherwise noted.
Advertisement