The Happy Hog Heaven Tournament is an Angry Birds Friends tournament that happened on:

It's an Autmn tournament that features several new things. But the most special of them is the Bulky Pig that appears in the levels.

It's a tournament filled with food, perfect for the piggies.

The Piggies got tired of all the junkfood they've had lately, so they raided Matilda's garden.
This week is all about veggies, fruits and hitting the gym!

When was the last time you were at a gym? (And did you spend it on an excersise bike while playing Angry Birds Friends? No need to hide, we've all been there...)

It's Matilda's Garden, in which there are hills with grass and rivers. Near them, there are broccoli trees, giant raddishes, giant berries, lettuce, and bushes. In the far background, there is giant cheese, cheddar, and meat slices that look like buildings. There is also a giant round cheese near them.

In the foreground, there is advocadoes, yellow, green and red sweet peppers, radishes, carrots, and tomatoes near a giant and long corn that is the floor of the land. 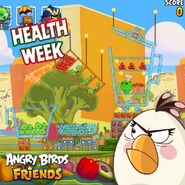 Add a photo to this gallery
Retrieved from "https://angrybirds.fandom.com/wiki/Happy_Hog_Heaven_Tournament?oldid=245127"
Community content is available under CC-BY-SA unless otherwise noted.