Male
Harvey is an inanimate character in The Angry Birds Movie 2.

Harvey is a camouflage suit in the form of a white-blue eagle. The chest and abdomen have white plumage, and the wings, head, tail consisting of three long feathers, and back are blue. Harvey also has a small fringe in the form of three small blue feathers, a long orange beak hanging down, with an upper row of teeth, and around the two large eyes are small black feathers that mimic eyelashes. The interior is a metal-wood frame, shaped like a cage, to which are attached pedals with a clutch that drives the legs of the suit, and two wooden mock-up hands, ending in white gloves. The disguise is rather cumbersome and accommodates at least three pigs and two birds.

For the first time, Harvey can be seen as a wooden frame with limbs in the form of large bird paws on Leonard's submarine.

Later a ready-made costume you can notice after the return of Red to the rest of the team members after reconnaissance on Eagle Island. All members of the team suggested to their leader the story "Harvey", but Red refused, submitting that the suit will draw all attention on himself, and he will remain one. After that, he criticized the disguise and went climbing to the top of the extinct volcano, and after him rushed Silver. The rest of the team poisoned it to the main entrance to the base, where due to poor coordination of their nearly declassify the guards, but they still get on base, where they cut it Brad Eagleberger in the bathroom, and then participate in a dance duel with Axel and a little later with the rest of the eagles guards. Then he breaks into force of the uncoordinated actions of Chuck and Leonard. 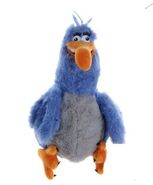 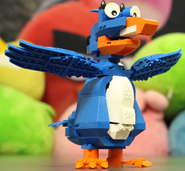