This article is about the Halloween version. For the normal version see Annie

Heavy Metal Annie is a variation of Annie in Angry Birds Evolution that could be obtained in the Most Metal Halloween Ever Event but now can be obtained in other events.

It’s about time Annie unleashed her inner beast - crazy what a little makeup can do. Likes: Man-Bats, Rulers, Hair Curlers

She is the normal Annie, but blue, the heart plumage is now white and in the shape of a  skull, the dark red tips are now dark blue, the beak and talons are wine-red colored and her eyebrows are black and her irises are red.

Based on Harley Quinn , her hair is now black and with pigtails. The left side of it has a blue tip at the end of it and the rubber is blue, while the right side has these features being red.  The rings around her eyes are now reddish-pink and with black stripes below them. Her beak is now brownish-white and her gaze is ow angrier.

Based on The Bride Of Frankenstein , she has tall dark blue thick hair with white parts, a darker brownish-white beak, and the same messy feathers on the sides of her face. She wears a dark blue tank top and a white bracelet.

Attack with two additional mirror images for 304 damage. The combo is consumed for 1% health instead of the usual damage bonus.

Attack with two additional mirror images for 970 damage. The combo is consumed for 1% health instead of the usual damage bonus.

As her rarity is good, she is very strong. Evolving her with the right evolution will make her stronger. Totems and Runes can also help. 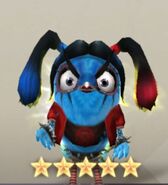 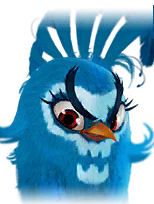 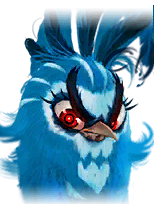 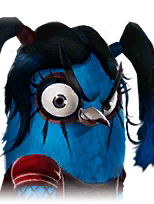 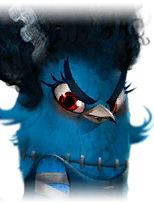 Hatched in an Hatchery

As a reward on Eagle Mountain
Add a photo to this gallery
Retrieved from "https://angrybirds.fandom.com/wiki/Heavy_Metal_Annie?oldid=256789"
Community content is available under CC-BY-SA unless otherwise noted.