The Hidden Loot Crates are objects in Bad Piggies, being released in the Custom Contraptions update.

They can be found mainly in the Hidden Loot Crates option, where there are three of them daily and can be found in a level. To ease the find of the crate, the player can watch a video and the level that the crate is located will open and it will be marked in the level's button, or if it isn't unlocked, it will only be marked on the level needed to unlock and the player will go to the section of the crate.

The Icon for where the Loot Crate is located is not precisely where it is, it's an image of the level it's located with a Loot Crate. The Loot Crates are often found in locations where it's almost impossible to get them.

The Hidden Loot Crates can also be attracted by the "Magnet" power-up.

If you get an item you already have, then it will be replaced by a number of nuts. The scrap (nuts) can be used in the Scrap Machine to get custom parts.

Afterwards, the Crate will be put in the crate slot and it will be opened for free after some time:

The crate's time can be speed up with coins. Crates can also be obtained from the Leaderboard:

A free Wooden Crate can be found in the Credits, just like the Golden Egg in Angry Birds Classic. It awards no experience, however.

Crates can be bought in the shop:

The first time before you purchase a wooden crate with coins, you get a free crate. Purchasing Field of Dreams will give you a free Gold Loot Crate.

1 and 2: Ross falls into a cave and finds a wooden crate. 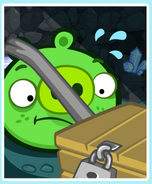 4: He finds a Golden Medium Wheel, along with scrap and desserts.

5: With the help of a Telescope, he finds a new crate and begins a new adventure of searching for crates to upgrade his vehicles.

Those notifications warn the player about loot crates:

Have A Crate Day