The player has to engage 2 Mummies and 1 Lightning Pig.

The player has to engage 2 Lightning Pigs.

Choose Red in Samurai, Matilda in Druid and Piggy McCool's Merchant Pig. In every waves, attack every turn with Red and Piggy McCool. Then, heal with Matilda if the birds' healths are not full, otherwise, attack with her. When, the Rage Chili is full, do as what we said at the "Warning". Also, protect the birds with Red if a Lightning Pig is almost ready to attack. Repeat this over until you win the entire battle or lose the entire battle. 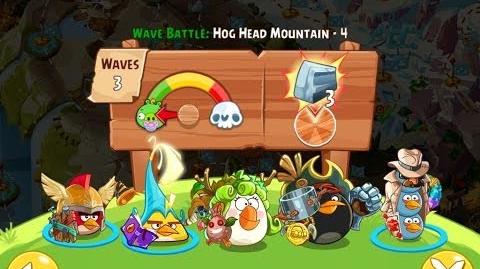 Retrieved from "https://angrybirds.fandom.com/wiki/Hog_Head_Mountain_-_4?oldid=268513"
Community content is available under CC-BY-SA unless otherwise noted.