Male
''Like my new summer house? That's what the best hugs in town will buy!''

The Hug Trader is a minor character that first appeared in The Angry Birds Movie. He is voiced by Adam Brown.

The Hug Trader has beige feathers, lighter feathers for the belly, a blue crest and eyebrows of such color, orange beak and feet, and blue pupils.

The Hug Trader runs a stand where he offers hugs, with the first one being free. His business flounders because no one wants to hug him. He also discovers that even Pigs, like Ross, do not like being hugged by him when they first arrived on the island.

He got his hug by Stella's Flock when the birds rebuilding the village.

He has no lines in this film, instead making sounds.

After the Birds modernized the village by establishing a slingshot transit system that enabled rapid transit throughout the island, the Hug Trader was among the many Birds who took advantage of such a system. He rides on the same slingshot route and disembarks at the same perch station as the Female Apple Vendor Bird, the one for the shops at Main Street. The stand is now a stone's throw away from her apple store.

This film also marks the first time that he spoke.

The Hug Trader is a carefree bird that always wants to be hugged, but most of the time, he is ignored. Red is uninterested in his services and is even suspected that he would steal hatchlings from other families after all the eggs were stolen and the village was destroyed. After the birds defeated the pigs and got the eggs back, he finally gets what he wants when Stella and her friends (Poppy, Dahlia, Willow, and Gale) hug him spontaneously.

Hug Trader would appear in the game as a story charcter or gimmic, but he was unused. There's a model for him that has a rigs, meaning that he would appear during cutscenes or other. 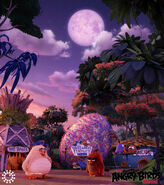 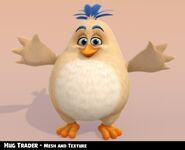