Frozen Armor - Target is protected by an ice barrier, that absorbs 325 damage. Lasts for 5 turns.

Choose Red in Samurai, Matilda in Druid and The Blues in Tricksters. Heal with Matilda if the birds' healths are not full and if they're full, attack with them. Then attack with the others. Remember to attack the Frost Hog first before you attack the Ice Knight! Also, you know, activate Red' secondary skill before Frost Hog attack. And after he attacks, use The Blues' secondary skill on the target that he's attacked. Use the Rage Chili on Matilda(if Frost Hog is still there) or Red (if Frost Hog is dead) when it is full. Repeat this over until you win or either lose.

Just deal with them as you would normally, unless stated otherwise. 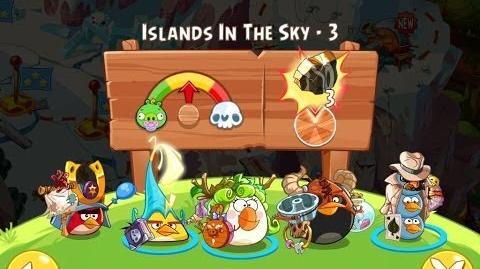 Retrieved from "https://angrybirds.fandom.com/wiki/Islands_in_the_Sky_-_3?oldid=268622"
Community content is available under CC-BY-SA unless otherwise noted.